Merideth Eberhart goes by several names. His published books are under M.J Eberhart and his friends call him ‘Sunny’, a nickname that was given to him by his mother. However, most people know him as the Nimblewill Nomad, the oldest person to complete the Appalachian Trail.

Now, Sunny spends his days living at the Ranger’s Cabin at Flagg Mountain in Alabama.

“I’m technically homeless, in the sense that I don’t have an address, but this is my cabin,” he said. The Alabama Forestry Commission lets him stay there in exchange for his volunteer services on the mountain. Sunny can be found doing general landscaping or helping people check into the cabins found on the site.

“I know I’ve become the old man on the mountain, but I’m really okay with that,” he said. Sunny goes on to explain that Flagg Mountain is a special place as it is the start of the Appalachian Mountains and the Pinhoti Trail.

“It has a special energy here and I enjoy being a part of it,” Sunny said. But, Sunny is still the Nimblewill Nomad and speaks fondly of his time on the trails.

“If you go down the alphabet, there’s a word that starts with every letter that means burden. Those burdens weigh a lot more than a 100-pound pack and I was able to take those on the trail with me.” Sunny describes how he used his time on the trails to write and be alone with his thoughts.

“It’s like a big pipe, you go in one side and come out a different person entirely. I’d like to think I’m better off coming out than I was going in.” Sunny’s last hike in 2021 started at Flagg Mountain and ended in Baxter, Maine. The trip was 2,620 miles long and covered fifteen states.

Before his trail adventures, Sunny had a typical childhood in a country town. The biography on his website details his childhood memories of “endless barefoot summers” and “hand-crank phones.” Sunny’s father was the town doctor and he describes them as “the quintessential ‘Ozzie and Harriet’ family.”

“I remember we would sit down at the dinner table, and the phone would ring or someone would knock on the door and he would be gone,” Sunny said about his father. Despite his love for the outdoors, Sunny entered into a career with the armed forces and later became an Optometrist.

He didn’t return to his roots until after his retirement when he moved to Nimblewill Creek in Georgia. The creek is close to Springer Mountain, the official southern start of the Appalachian Trail. His blog posts described how he was “making up for lost time” and began hiking almost full time.

The creek would later become the inspiration for his trail name, Nimblewill Nomad. Sunny started a blog in 1998 where he would share journal entries and poems he called “ditties”. Despite having published a collection in 2001, he doesn’t take much credit for them.

“When that spout was on, and it was only on for a little while, I was just the messenger. There were times when a word would come off the end of my pencil and I’d have to look it up to see if it was right,” he said. Sunny went on to explain how his writings were more from the world around him than within.

“It was just a small part of my life and I ended up giving most of the books I published away to people just to share them,” he said. Sunny’s main purpose for his blog was to share his experiences with other people.

“That’s why I always end my entries with a quote from someone else, I want people to connect and understand what I’m saying,” Sunny said. His blog gained a lot of traction over the next twenty years and has had over 500,000 hits.

“I know I ramble sometimes and I tell people the best way to read my books is like a devotional, to just read one day at a time and use it to reflect,” he said. For the hiking community in the south, Sunny’s writings and trail adventures have given him celebrity status.

“I had heard about Sunny and the record he set on the Appalachian Trail. I was thrilled to meet him and learn from his experiences,” said Mike Lebo. Lebo’s trail name is “Papa Bear” and he stayed with Sunny in his cabin before beginning his hike through the Pinhoti Trail. Papa Bear is planning on recreating Sunny’s “Bama To Baxter” trail and uses his youtube channel to document the hike.

“It was really special to get to spend time with him and talk with him,” Papa Bear said. Many of the hikers that have gone through Flagg Mountain had a similar experience.

“I just knew that he had that magic about him and knowing him is truly one of the greatest blessings in my life,” said Jennifer Griffin. Griffin, whose trail name is “Goldilocks” met Sunny on an overnight hike to Flagg Mountain. Sunny offered his cabin to keep Goldilocks and her friend warm during an unexpected drop in temperatures on the mountain. However, at the time Goldilocks said she “did not know that he was a legendary hiker.”

“I was so impressed with Sunny that I rode the hour and a half home with my friend, got back in my car and drove back to Flagg Mountain for the Lunar Eclipse party they were having,” she said.

Despite his status in the record books and growing fame, Sunny’s personality remains unchanged.

“He is humble, patient and kind,” Goldilocks said. Sunny showed this humbleness when he discusses his most recent hike as he continuously praised the previous record holder.

“I mean the guy who was most excited for me to break the record was the guy I took it from,” Sunny said. The record for the oldest person to ever through-hike the Appalachian Trail was set by Gray Beard set the record in 2018 and beaten by Sunny in 2021. When he completed the final summit in Maine, Gray Beard was waiting for him with a gift. Gray Beard had carved a hiking stick with the phrase: “Nimblewill Nomad, the oldest thru-hiker ever” into it.

Now, Sunny has turned his attention to the future state of the trails. A lot of people have suggested moving the start of the Appalachian Trail further south to Flagg Mountain.

“I want the start to stay in Georgia because the Pinhoti Trail is getting its own reputation and it needs to stay separate from the Appalachian Trail,” Sunny said. The move would combine the two trails and bring a lot more foot traffic to Flagg Mountain. Sunny described in a blog post how several articles used his photos and his name “which by association, implies that I support the initiative.”
Sunny goes on to explain that “Alabama doesn’t need the issues that would come with such proposed AT2AL disruption.” Both trails are growing in popularity and many are worried that Flagg Mountain cannot handle the number of guests the current trailhead does. For more information on the issue, visit the petition on change.org or the Pinhoti Trail Alliance Organization’s website.

🇺🇸🇺🇸🇺🇸
Congrats to the Class of 2022!
#Repost @montevallo with @make_repost
Finals week is here! Good luck on your exams!
There is no newscast without the hard work of a lot of folks behind the scenes each week. Meghan and Garrett have done the bulk of the technical work to make our on-air team look good each week. We’ve also had a lot of help each week from students selected for the Dean’s Strong Hall Production Crew Scholarship! Thanks to every single person who pitched in to make VVN a success this semester!
Check out our final newscast of the semester! Check out our final newscast of the semester! #linkinbio

Search for a Story 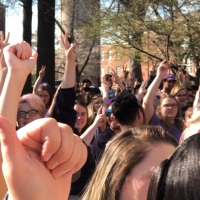